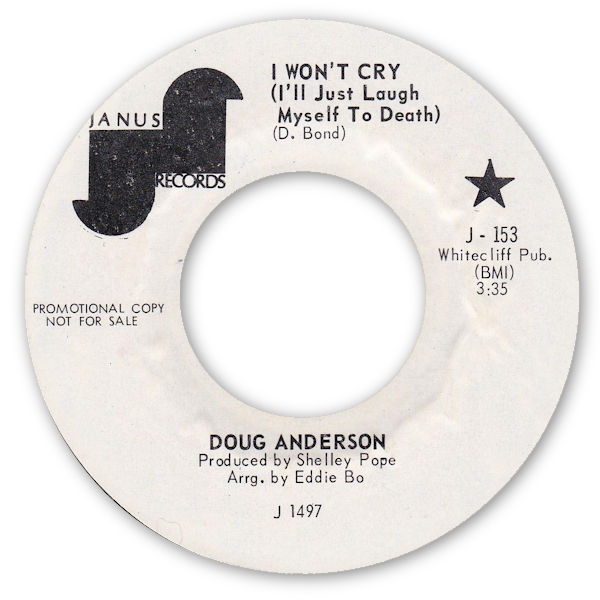 New Orleans legend Eddie Bo was involved in an enormous body of work in the 60s – some of it was very fine indeed, but a lot of it wasn’t. He was less active in the 70s as the local record scene declined but this gem was one of his very best. The instrumental funk side has them falling over themselves to get on the dancefloor but I Won’t Cry (I’ll Just Laugh Myself To Death) has always been my favoured side. Over some lively strings Anderson gives an exemplary performance of a man in torment. The end section complete with forced laughter is particularly good.

Some commentators seem to think this is Bo himself in disguise but the vocalist doesn’t sound anything like any Eddie Bo 45 I’ve got – Anderson’s voice is in a lower register and is much more forceful than Bo’s rather light baritone.

UPDATE ~ I'm delighted to say that Doug himself has contacted me and has very kindly given me some background on his life and career. Like Curtis Johnson Doug was a member of the Sonics who cut for White Cliffs before going solo. His Janus 45 was written by an old school friend from Mississippi and was recorded in Metairie, LA rather than New Orleans. Shelley Pope, who was a local flamboyant DJ, put the money up but the musical creativity came from Eddie Bo. Doug sang with such legends as Irma Thomas and Ernie K-Doe with whom he did several tours. But no more records came about, in part due to Doug's refusal to go along with some rather shady business deals. He now lives in Baton Rouge where he sings with the Evangelistics a local gospel group.

FURTHER UPDATE ~ Terry Pattison writes from New Orleans to say that there are more Doug Anderson 45s. He lists the USA releases for Doug both as a single artist and as part of the Doug & Dave duo. He says that "Dave" is Dave Bond who was also a member of the Sonics. These 45s have been added to the discography. I have the Bronze 45 and the track on the Folkways LP and they are all mid or uptempo R & B numbers but I have heard nothing that can hold a candle to "I Won't Cry".