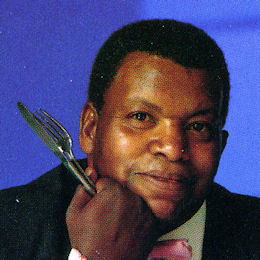 To southern and deep soul fans Kip Anderson is a real hero. With a recording career spanning almost 4 decades his discs were always worth hearing and, at his best, he made music of the highest calibre. An accomplished keyboard player too, he also wrote much of the material he cut. But it says much about the music business of his time that, despite his talents, his main way of earning a living was as a DJ rather than a performer. Of course Kip’s warm personality and lack of “push” may also have had something to do with it as well.

Kip was born Kipling Taquana Anderson in 1938 in Starr, SC and got his start in music in a little band at high school. He started writing songs and met a professional musician called Charlie Derrick who sang with gospel quartet the Spiritualaires of Columbia, SC. Derrick put up the cash for Kip’s first disc, releasing it on his own imprint before leasing it out to Vee Jay where he had contacts. The tracks are more than a little raw but on the ballad The Home Fires Burn Brighter After All there is a definite hint of the masterpieces to come in Kip’s gospel flourishes and slightly lisping diction. 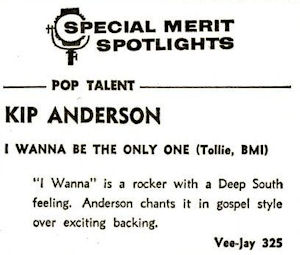 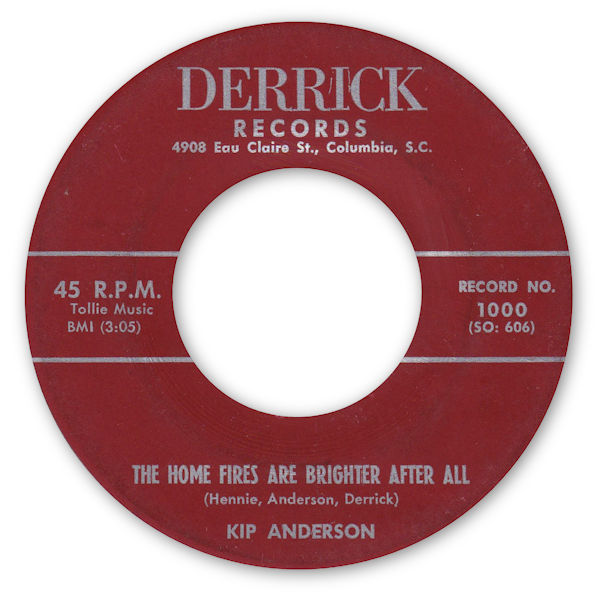 The fine slow ballad Till Your Love Is Mine on Sharp benefits from more polished production values, but his next 45 for Bobby Robinson’s Everlast concern is Kip’s first real classic. I Will Cry is a strong blues ballad on which Kip really cuts loose, gruff and totally convincing over riffing saxes and his own forceful piano. Back in South Carolina a rather disappointing bluesy That’s When The Crying Begins was picked up by ABC. Perhaps revealing their distribution and radio power they got Kip his only chart action when it reached no. 130 on the Billboard Pop “Bubbling Under” lists for just one week of September 19 1964. This 45 was followed by a masterpiece of deep soul in I’ll Get Along. I love the sax which weaves in and out behind Kip’s impassioned vocal and pumping triplet piano on the first verse, and the way the production plays with the dynamics – gentle on the verses and climactically loud on the chorus. A gem.

The next 45 on Tomorrow was cut in Chicago with Daddy Gene Barge, and Here I Am Try Me was Kip’s best cut to date. His voice carries more authority and power, and his use of dynamics to get the lyric across is superb. Barge’s arrangement – especially the horns – is spot on too. At around this time Derrick and Anderson also tried to get a hit with yet another of their own labels True Spot. The excellent ballad Woman How Do You Make Me Love You Like You Do with its spoken rap in the middle and wonderful organ/piano combination was another winner. Chess picked it up and for his next session with them sent him down to Fame. The result was Kip’s biggest seller A Knife And A Fork based on a “High Heel Sneakers” riff. However I much prefer the super country soul of Take It Like A Man which features some lovely guitar fills (Junior Lowe?) and a big horn section behind a really heartfelt Kip vocal. A neglected Muscle Shoals peach of a track. 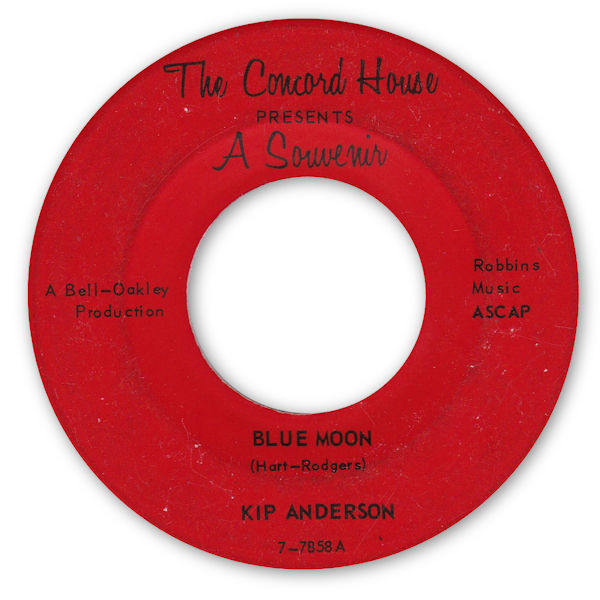 Kip put out his versions of Blue Moon – full of vocal fire - and Unchained Melody on a label named after a restaurant in Clinton, NC, where he was working and sold a lot of copies thanks largely to the plugs he was able to give the 45 from his shows on WIDU in Fayetteville, NC. At this time he also produced music at Arthur Smith’s studio in Charlotte on Little Ronnie Mudd and an interesting single on Vietnam soldier Sgt. Tommy Dorster. These came out on Malpass, named after the owner of the aforementioned supper club. All these singles are now pretty rare.

And Kip’s next records built on the artistic achievement of his Alabama cuts. You’ll Lose A Good Thing is just outstanding. It was cut at Mark V studios in Greenville, SC and among the musicians present were Moses Dillard and a young Peabo Bryson. From Kip’s opening rap, egged on by Charles Derrick in the background, this wonderful track just builds and builds. Kip really turns the screw in his gruff delivery and the horn charts are genius – the stabbing blasts and that downward 4 note slide really get me. His second Excello release, Letter From My Darling – which must have been cut at the same session – is just as intense. Kip turns the old Little Willie John song into a Vietnam epic with an astonishingly anguished finale. Never fails to raise the hairs on the back of my neck. Hats off to Mr Derrick for a first rate production and to Moses Dillard for the chord changes and horn charts.

Kip’s final Excello 45 was cut at their Nashville studios and I Went Off And Cried is yet another sensational deep soul ballad of distinction. Again he half talks and half sings his way through a mournful song of considerable power. The horns aren’t quite as good sadly. Author Barney Hoskins took Kip’s line “Say it one time for the broken hearted” as the title for his excellent book on country soul. A very good choice.

Kip’s final 45 from the Golden Age was cut at Quinvy in Muscle Shoals. Quin Ivy had been impressed with Kip’s work at Fame and invited him down for a session which produced Abide in Me and Frozen Love neither of which sadly – and unusually for that studio – had anything near the impact that his Excello tracks generated. The Edie single named for the daughter of a record store owner in Fayetteville who put up the cash for the release, is now probably Kip’s rarest 45.

Kip was never reticent about the long time he spent in jail for drugs offences – indeed he once referred to it as “saving his life” – but by the time he got out in 1987 the music business had changed beyond recognition. Heavy gospel based soul had all but disappeared. Kip resumed playing and singing but for the first time recorded straight church material which he released on his own Lorna imprint, named after his daughter. Although A Dog Don’t Wear No Shoes and A Knife And A Fork contained some good songs such as Lonely Man on the first set and Careless Things We Do on the second, both CDs suffered from too many covers and Ichiban’s habitually low production values. But Kip remained in fine voice, a fact emphasised by the liveliness of his final recordings for Beach Scene specialists Ripete with Nappy Brown.

Right up until his sad passing on August 29 2007, barely a year after Derrick left us, Kip was full of music, continuing as a DJ and playing gigs both at home and also abroad, leading Trudy Lynn’s band on her tour of Europe for example. His legacy is in the wonderful music he made – maybe the richest of all soul artists who stayed in the Carolinas.

My fortunate music career incubated in the live music scene in Fayetteville, North Carolina, 1964-1970. It didn't take long to run into Kip. He, my dear friend, Dave Butler and I became instant and strong friends. Besides becoming a dear and valued friend, Kip generously and repeatedly proved himself a tremendous career asset to Dave and me. And in both the live local and national recording arenas. Dave was an unusually-gifted songwriter. (We lost him to throat cancer in '06). He wrote "Watch You Work It Out," and our local rock & roll band "waxed" it shortly before Kip. A few weeks later, Kip, Dave and i were hanging at Kip's one afternoon, and Kip suggested we three write a song. In 45 minutes, Kip and Dave had "I Went Off And Cried" in its completed form.

Kip's true caring and generosity knew no bounds. Or boundaries.

Woman how do you make me love you like I do - TRUE SPOT 71001One of his local live music contacts was called Serge. Serge owned a couple of venues (Well, joints!) in downtown Fayetteville. And yes, every cliché you can think of in connection with "downtown" or "joints" fully applies. Yet, Kip pitched our young white kids' rock & roll band to Serge, and Serge booked us. And repeatedly. We young rock & rollers had a ball playing his places!

Kip's core devotion and dedication to the music is glaringly evident in all his work. And no one exuded more real soul. I would assert all that fully applies whether we're talking about his singing, speaking, playing or writing. His knowledge of the music was equal. And he was the perpetual student. All this made talking music with him a rare treat. And a never-ending education, in terms of hard information, and just comparing opinions. To further add to that, Kip was every bit as warm as he was generous and caring.

And equally bright. And wonderfully verbal. And he had a stimulating command of the language, and facility with it. And he loved to laugh!

I am very glad to be able to say with authority that Kip was every bit the same person in his later years. Nothing connected with his unfortunate '70s lifestyle choices changed who he basically was at all. I lived in Myrtle Beach, South Carolina, '97-'02, and jumped at every opportunity to again work with Kip. Or even be around him. Back and forth phone conversations continued until we lost him. And I am immeasurably richer for all of it.

Thank You for everything, Kip Anderson! We sure miss You big-time! 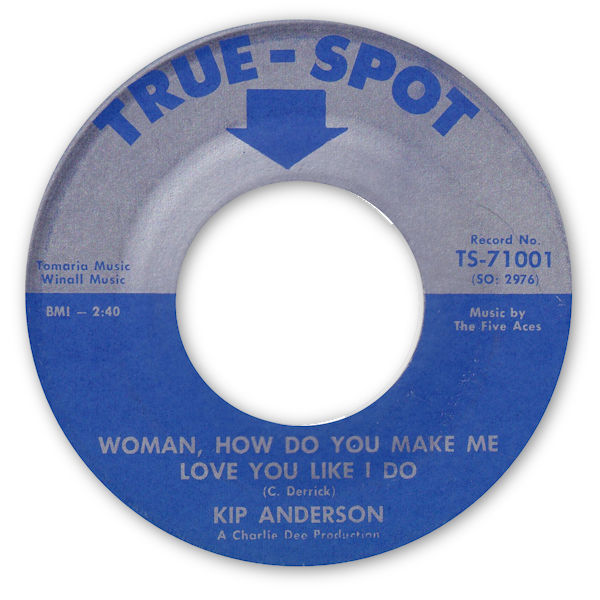 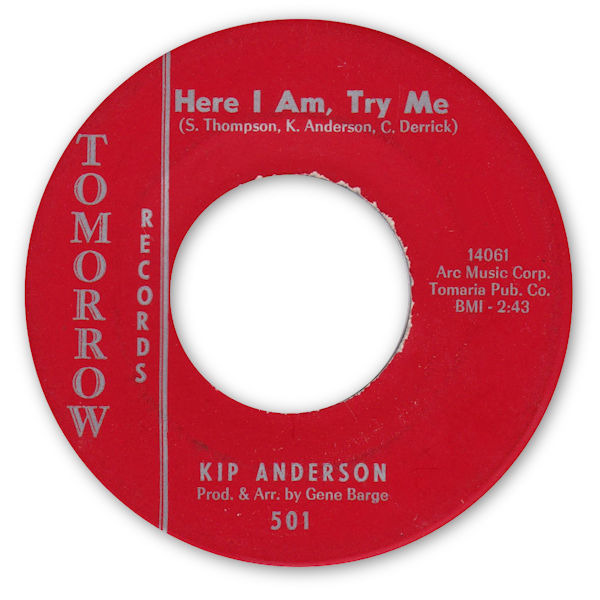 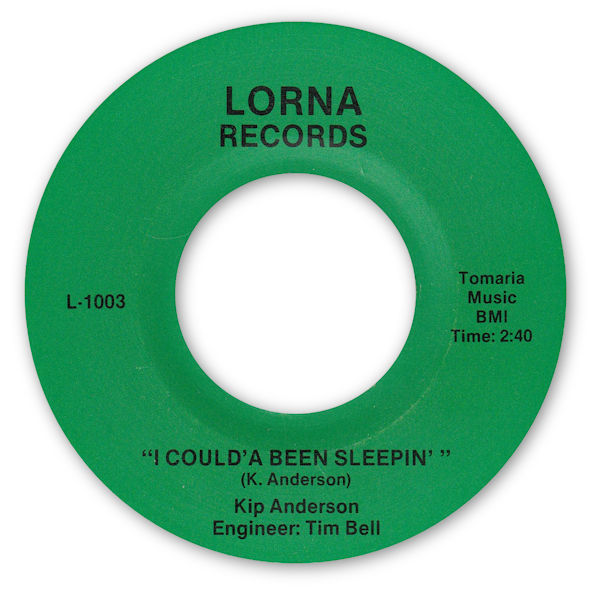 UPDATE ~ Hitoshi Takasawa writes with info on the spelling of "Eydie" records and the track listing o Kip's very rare Eydie LP "The best of Kip Anderson and The Soul Agregation" (Eydie 10238/10239) :
A side : Blue moon, Two blind mice, Knife and folk, Tell her that I love her, You'll lose a good thing, That's allI can do, To a friend.
B side : Frozen heart, I went off and cried, Watch you walk out, Letter from my darling, Abide in me, Woman how do you make me love you like I do, Without a woman.

My friend Tom de Jong writes with the amazing info on a final Kip Anderson CD "The Doll And The White Roses" on his own Maemoose label. The tracks are :- Doll And The White Roses, Oh What A Pretty Little Baby, Go Where I Send Thee, Prince Of Peace, Little Drummer Boy, Jesus The Light Of The World, Silver Bells, Gonna Have A Merry Christmas.

I'm very grateful to Hitoshi and Tom for the excellent info and to Pete Nickols for the Billboard Ads.